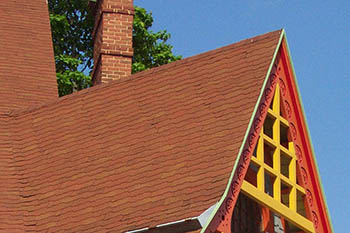 Built in 1883, this four story Stick style (a variation of the Queen Anne style) mansion was constructed as a showcase of wood and stained glass.

Occupied by the original owner’s family until its conversion to a Bed and Breakfast inn, the interior remains original, with only minor updating like wiring the original gas light fixtures for electricity. The house still boasts of eight varieties of varnished woodwork (some from South America), eight fireplaces, 15 different patterns of embossed wallcoverings, original chandeliers, hand-painted and embossed tiles, elaborate built-ins, and a dazzling display of over 80 stained glass windows.

The Richards House Bed and Breakfast Inn was established in 1989 by David Stuart. Michelle has been the innkeeper since July 1989.

Note: The exterior still suffers from the brown concrete-based paint applied by a bridge painter (it was the first house he ever painted!) about 1960. It must be removed before repainting. Each time the original owners saved up the money to strip and repaint the house another catastrophe (the roof leaked and needed replacing or the water supply line to the house ruptured and required rebuilding the rear retaining walls) demanded the funds. The exterior was left to deteriorate but still shows all of its original details. Restoration is underway and we have already received awards for work done on the outside, so please don’t let the exterior deter you from seeing the fabulous interior.